By Kent Gray/Triathlon.kiwi
The enthralling Hayden Wilde versus Matt Hauser Super League trilogy will become a must-watch tetralogy in Toulouse in the early hours of Monday (NZT).

But rather than the big Aussie, it is the diminutive Portuguese seal-bite survivor Vasco Vilaca that has suddenly become the Kiwi No.1’s most serious threat – at least mathematically.

Everything changed in Malibu a fortnight ago courtesy of Hauser’s road-rash encrusted elimination and Wilde’s second win in three starts. Suddenly the Gold Coaster went from leading the race and the series to the victim of a fully-fledged Californian calamity, the non-counter effectively ruling him out of the title race heading into Toulouse.

Now 14 points adrift of Wilde in third place overall, Hauser will likely need a pair of wins in Toulouse and at the Grand Finale in Neom, Saudi Arabia on Oct. 29, coupled with serious misfortune to befall Wilde in at least one of the two remaining rounds. The former is not improbable but few would wish the latter on Wilde who has lived up to his favourites tag thus far and deserves to race away with the $50,000 champions’ bonus.

A pair of 5th place finishes or better will get the job done for Wilde even if second-placed Vilaca can beat the odds and tick off back-to-back wins. The problem for the 23-year-old Portuguese, who had a close encounter with a seal during training in Malibu, is that Wilde only has eyes for winning.

Even if he can afford, and perhaps should, play it safe in Toulouse, Wilde isn’t wired for easing off in any race. Furthermore, the Whakatane Falcon in Team Shark’s clothing made it crystal clear during his recent New Zealand Triathlete podcast appearance that being beaten into third by Hauser and Vilaca at the second round in Munich earlier this month hurt for only one reason.

“I wasn’t even bothered that I got beaten by Matt because he’s such a classy mixed team relay athlete. The thing that I was really bothered about was getting beaten by Vasco,” Wilde said.

Shots fired and…ouch! Of course, Vilaca is unlikely to be aware of the dig and perhaps more pertinent is how Wilde races around the unique central city course. The 25-year-old is an aggressive racer by nature but may choose to temper that early in the ‘Triple Mix’ format at Port del Daurade after Hauser’s Malibu elimination proved how quickly things can turn turtle in SLT.

As far as Chris McCormack is concerned, Wilde is the man to beat in Toulouse. The two-time Ironman World Champion and Super League co-founder is backing the Kiwi for the first time in the series, a prediction that will no doubt spook any superstitious Kiwi fans who are quite comfortable with Wilde being a Shark-finned underdog.

“I think the momentum is there. Matt Hauser will be very tough to beat but I think Hayden is showing some form and will like this format,” McCormack said. “Even though he has been ill, I think Vasco Vilaca will come third.”

It’s a tasty prospect all around.

About the only thing working against Kiwi tri fans is the unfavourable time zone. Coverage starts at midnight Sunday (Sky Sport 2, Channel 52) and rolls till 2.30am so you’re either an absolute tri tragic (like us) happy to go to work blurry-eyed on Monday, waking up early to squeeze in the recording over a stiff coffee (or three) or loving that new work from home flexibility.

Whatever your method, here are four other compelling reasons to catch the penultimate race of the season somewhere, somehow. And if you just can’t make any of the above work, Tri NZ will have your back with full coverage early Monday on Triathlon.kiwi.

After crashing out in Malibu, Matt Hauser admitted: “I am licking the wounds right now. It’s just a few scrapes and bruises, but mentally it’s a little bit damaging.”

In the next heavy breath – he was interviewed seconds after being eliminated – the Aussie did what true blue Aussie battlers do by vowing to fight back.  “This will hurt my chances to win it but I will fight tooth and nail until the end.”

That there’s fighting talk and we love it. SLT is all the richer for the Wilde-Hauser battle so here’s to another epic fight to the tape for trans-Tasman bragging rights in Toulouse.

Hauser Part II and how that impacts Kiwi Tayler Reid There is a race within the race in Toulouse for vital swim jersey points with Kiwi Tayler Reid tied atop the standings with South Africa’s Jamie Riddle and Hauser prowling close behind in third. It will make the opening slash in France even more compelling and no doubt add some heat to Wilde’s race.

Expect #GissyHard Reid to stick his powerful oars right into opening melee to try and snare the swim ‘Short Chute” for the Sharks. With a $15,000 bonus on the line for winning the ‘Blue Jersey’, he has every reason to scrap although there are other considerations in the periphery, notably defending his fourth place overall and next week’s World Triathlon Championship Series resumption in Cagliari.

Nicole van der Kaay, eighth overall in the women’s SLT standings, has to walk that tightrope too as Tri NZ’s Performance & Planning Manager Stephen Sheldrake revealed in a fascinating look at where the Kiwi power couple sit in the big scheme of things heading into the last eight weeks of the elite short-distance season. Read the story here. Swim-bike-run, pause for two minutes, run-bike-swim, pause for four minutes (while the accumulated times are calculated to sort the pursuit start times) and then go one last time – but this time bike-swim-run, and two laps on the final run instead of one. Throw in short chutes available for the first athlete across the mount line after the opening swim, bike and run and yeah, it’s a frenetic watch. Interestingly, Wilde won the last time the ‘Triple Mix’ format was used in the series opener in London. No prizes for guessing who was a close second.

Taylor v Taylor with a little Cassandra on the side

American Taylor Spivey will take a one-point buffer in the women’s standings over Georgia Taylor-Brown into Toulouse after victory in Malibu. It came after Taylor-Brown crashed on the same corner as Hauser in Malibu but recovered to finish third.

Taylor-Brown’s bike-run prowess is likely to give her the edge over Spivey although the return of Cassandra Beaugrand adds another dynamic. The Frenchwoman, who bypassed Malibu, will be tough to beat on home tarmac unless, of course, those roads are wet. If so, then all bets are off. Beaugrand clearly lost her nerve in Munich after crashing during a slippery practice ride and question marks about her confidence remain. 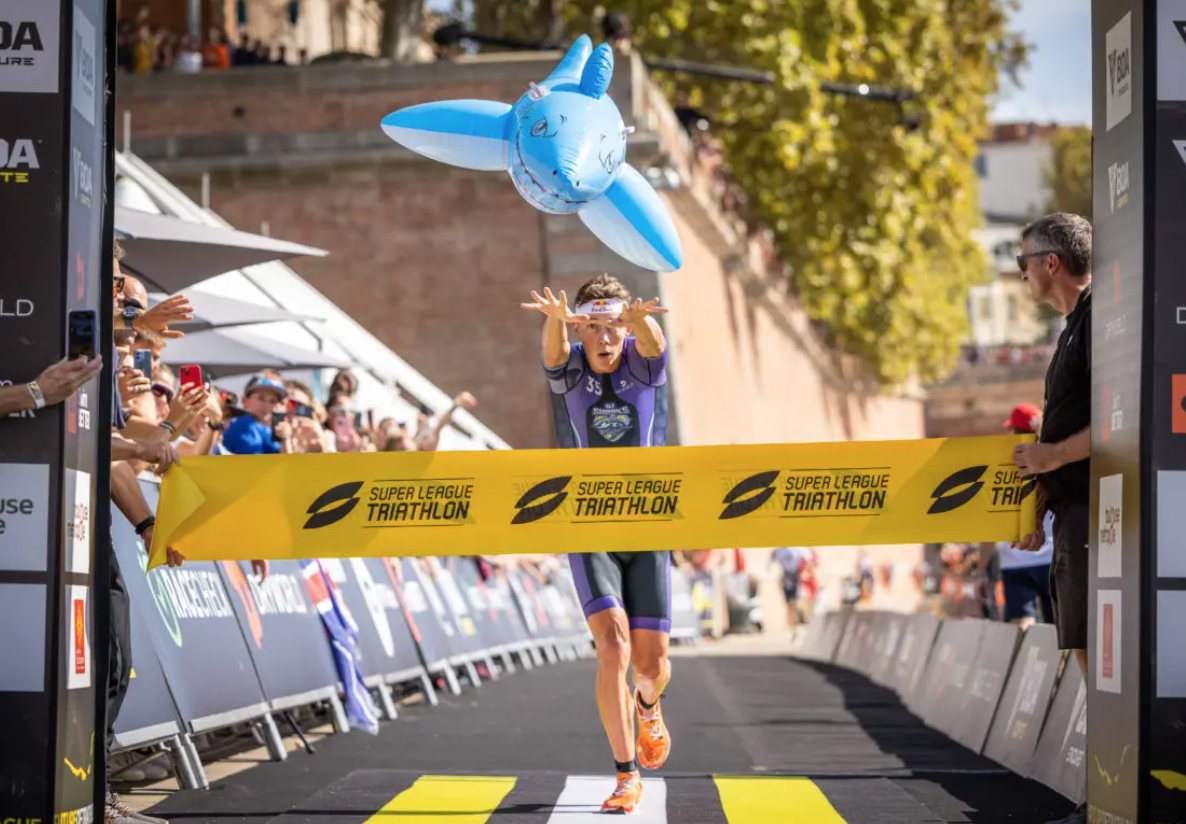 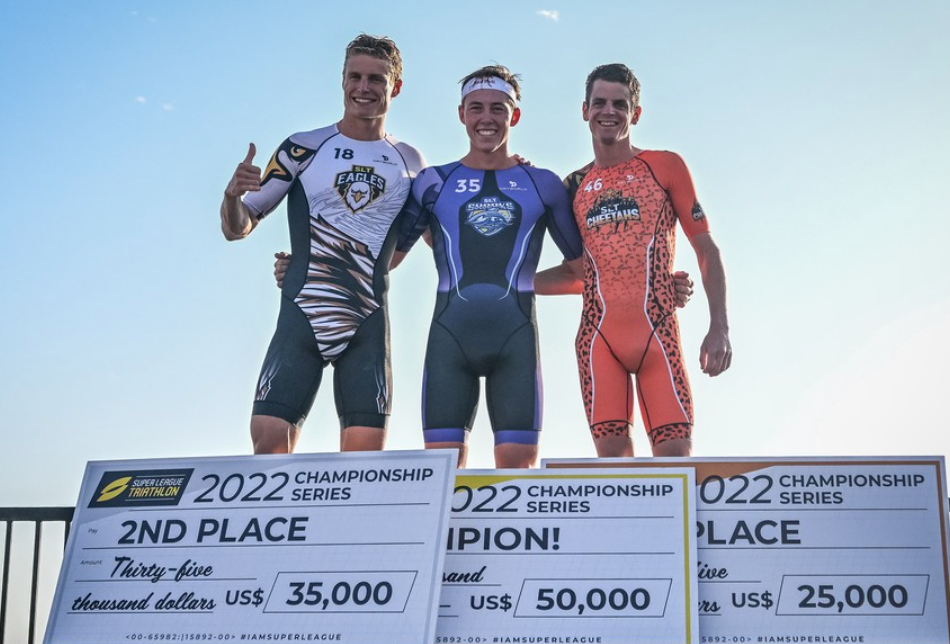 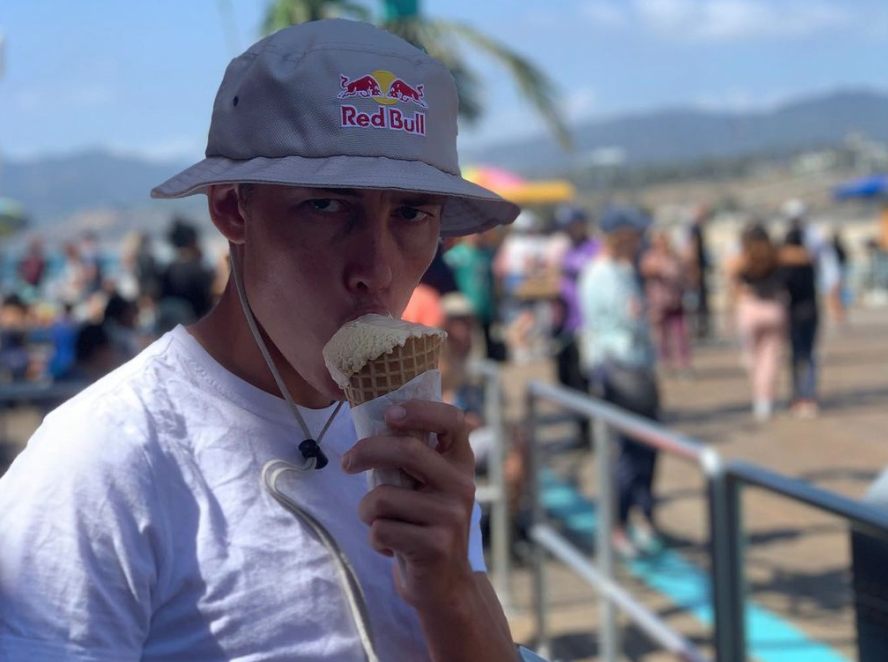